Article appeared in The Overflow by Irrigation Australia, Autumn 2018 Edition

In the Spring 2017 and Summer 2018 editions of The Overflow, we outlined the data management, water scarcity, environmental and climate change pressures facing current and future irrigation projects. We also outlined the practical response to these pressures provided by SWAN Systems.

SWAN is a cloud-based system that can automatically collect and store weather, irrigation, soil moisture, and fertiliser application data. The software analyses the data to provide recommendations for optimised irrigation – it takes the guesswork out of optimising water use. It also provides integrated modules for nutrient planning and management, and satellite data is used to generate a health (or “greenness”) index for sites based on absorption and reflectance data.

In this edition we report on findings from two public open space pilot projects we have conducted to assess the irrigation management module with potential clients in WA. Participants were interviewed prior to the trial to determine the priority benefits they wanted from using SWAN. On-line access to the software was provided to participants and sites configured for soil, irrigation system and turf characteristics. Data connections were established with flow meters, moisture sensors, weather forecasts and observations.

Alkimos Beach Estate is a new coastal development subject to impacts from groundwater scarcity and climate change. The estate has recently received a national
award as the best residential development for 2018 and is also Australia’s first 6 star Green Star development, in part, committing it to reducing the project’s impacts on land, water, and the atmosphere. To mitigate potential issues, smart water initiatives have been implemented throughout the 224 ha estate, with significant areas of public open space designed to be water-smart. SWAN Systems is being trialed for its capacity to make a meaningful contribution to maintaining the estate’s Green Star sustainability rating. Marshall Oval, a sporting oval within the estate, was selected as the trial site for SWAN Systems at Alkimos.

When the trial started, Matt Alvaro – maintenance manager from Total Eden, said their aim was to improve their proficiency in data driven water management. Priority measures for this were identified as maximum water and energy efficiency per hectare, and optimal health of the landscape.

The site was undergoing rehabilitation during the trial period. Nevertheless, with continuous review and tracking of soil moisture, significant cutbacks in the amount of water being applied were made. “We discovered the application rate of some stations was significantly higher than the design figure,” said Matt. “Our initial decision was to make a large cut back to run times of 30% which showed improvement in soil moisture and allowed us to make further proactive adjustments for the following months. We aim to continue to calibrate the run cycles until we have a fit with what SWAN is saying is the optimum soil moisture, and we can check plant performance is okay using the satellite imagery and field inspection.”

The satellite imagery provides a record of turf health throughout the irrigation season (Figure 1). The results of a number of management events can be observed. Following a pump breakdown over the New Year period, extensive renovation of the oval, including fertiliser application, was done during January, 2018. Another foliar fertiliser application was done in late March. Accordingly, the oval exhibited its lowest NDVI (indicating the poorest turf health) in January and later imagery shows turf recovery peaking in April, 2018, reflecting the success of the renovation and other management initiatives.

A longer term study has been conducted at a high use sports oval, south of Perth. The oval is approximately 3 ha and irrigated with bore water. Groundwater availability is limited and future reductions in allocations are a threat. Maximum water use efficiency is important to meet this challenge and investment in telemetry and monitoring was the first stage in ensuring this.

Irrigation uniformity is high and loggers have automatically collected flow and soil moisture data for more than two years. The approach for this trial was to upload historical daily data to SWAN for the 2016/2017 season and collect data for the 2017/2018 season in real time. The 2016/17 season was analysed with the benefit of hindsight and the 2017/18 season was actively managed from January 2018 onwards using daily collected data, and supported by turf management advice from Sports Turf Technology.

The 2016/17 and 2017/18 irrigation seasons were each noted as cool summers and were quite comparable for monthly ETo and rainfall – indeed there was one significant (~100 mm) summer rainfall event in each year. The oval was set up in SWAN with an indicative water budget of 9000 kL/ha, an amount flexible within the context of the water licence, which covers a number of parks and reserves. 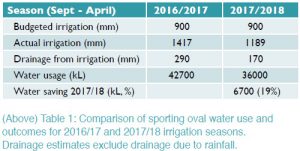 The trial used SWAN to set budgets and track irrigation application, soil moisture and drainage. SWAN estimates drainage as the amount of water that is surplus to plant needs and which thus drains below the root zone. In aggregate the data indicate significant water savings along with better management of soil moisture status. Specifically, there was a 20% water saving in 2017/18 compared to 2016/17 for the September – April irrigation season (Table 1). This in turn resulted in 40% less drainage from over-irrigation, an important improvement, especially in areas where the risk to water quality from nutrient leaching is high. Associated with these savings, soils were maintained much closer to the “Optimum” soil moisture in 2017/18 than 2016/17, during which the soil was much more frequently found to be “Wet” (Figure 2). 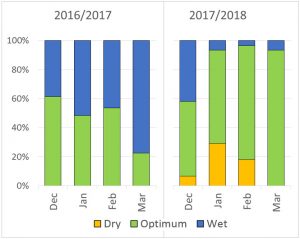 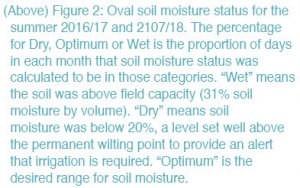 Conclusions: What themes have emerged?

We report studies on two key public open spaces where SWAN Systems has enabled identification of significant water savings potential. Importantly, SWAN also facilitates ready access to and visualisation of real time weather, flow, probe, and satellite data. Having this at their fingertips gave users the confidence that cutting back or altering applications in both the long term (seasonal planning) and short term (responding to site-specific weather forecasts) was appropriate and low risk.

Matt Alvaro: “We all learn a lot every time we do a review (using SWAN) and are confident in our decisions, as there is greater certainty than our normal assessment provides. This is important when it comes to deciding what adjustments to make because the supervisors and operational staff are on the same page.”