Article appeared in The Overflow by Irrigation Australia, Winter 2018 Edition

In this, the fourth (and final) article in SWAN Systems’ Overflow series, we will focus on golf course management. SWAN is a cloud-based decision support system that can automatically collect and store weather, irrigation, soil moisture, and fertiliser application data. The software analyses the data to provide recommendations for optimised irrigation – it takes the guesswork out of optimising water use. It also provides integrated modules for nutrient planning and management, and satellite data is used to generate a health (or “greenness”) index for sites based on absorption and reflectance data.

As well as regulatory drivers for irrigation optimisation, the golf sector, like other irrigation sectors, has a variety of objectives. These include:

Putting it into context

SWAN Systems software can be used as an effective management tool both on a day-to-day basis for getting irrigation and nutrition right, and for seasonal review, reporting, and to identify areas for improvement. Putting it into context We’ll look at an example of golf course management using SWAN Systems – the Rottnest Island Golf course. Rottnest is a holiday destination island off the coast of Perth, Western Australia that is effectively a “closed” system, with limited mains water supply and very limited and regulated capacity for environmental discharge. The golf course and the neighbouring oval are the primary public open green space facilities on the island and comprise the bulk of the irrigated turf areas. These also provide a means of absorbing recycled water to ensure Public Open Space (POS) maintenance does not draw on potable water supplied to Rottnest. As a result, the water supply will be relatively plentiful during peak holiday seasons (summer) and one of the aims for POS irrigation is to use enough water during these times, while still protecting the environmentally sensitive surrounding salt lakes and wetlands from nutrient discharge. A significant proportion of the nutrients derive from the background water, with occasional sparingly supplied fertiliser. Monitoring nutrient application key to ensure turf nutritional balance is maintained.

Water usage is bound by regulatory requirements and a nutrient management plan. These require that root zone soil moisture does not exceed field capacity during irrigation. This is to minimise the risk of waterlogging during the irrigation season: a shallow water table underlies much of the course. Water, Nutrient and Satellite Data

SWAN Systems was used to collect and analyse Rottnest Island Golf Course’s daily irrigation data, soil moisture data, and nutrient applications for tees, fairways and greens from January 2018 to May 2018. SWAN also had access to daily water use for the whole course from November 2017 to May 2018. The irrigation season is typically drawing to a close by April, but Rottnest (and Perth generally) experienced an unusual, extended dry autumn. There was negligible rainfall until the last week of May. In the first instance, we reviewed satellite-generated NDVI 1 imagery for the course and noted that greens and fairways had been maintained with relatively consistent greenness during the year (Figure 1). As might be expected, the putting surfaces were greener.

The water usage pattern at Rottnest Island Golf Course has been quite conservative, in line with the environmental constraints. Across the whole course, application rates were similar to that expected for a passive Perth POS reserve (6,500 kL/ha; see Figure 2). Slightly more water could have been used on some of the holes between January and May, while still avoiding drainage. This is typified by the soil moisture summary generated by SWAN for Fairway 8, where approximately 15% of the time the soil was dry (Figure 2b). 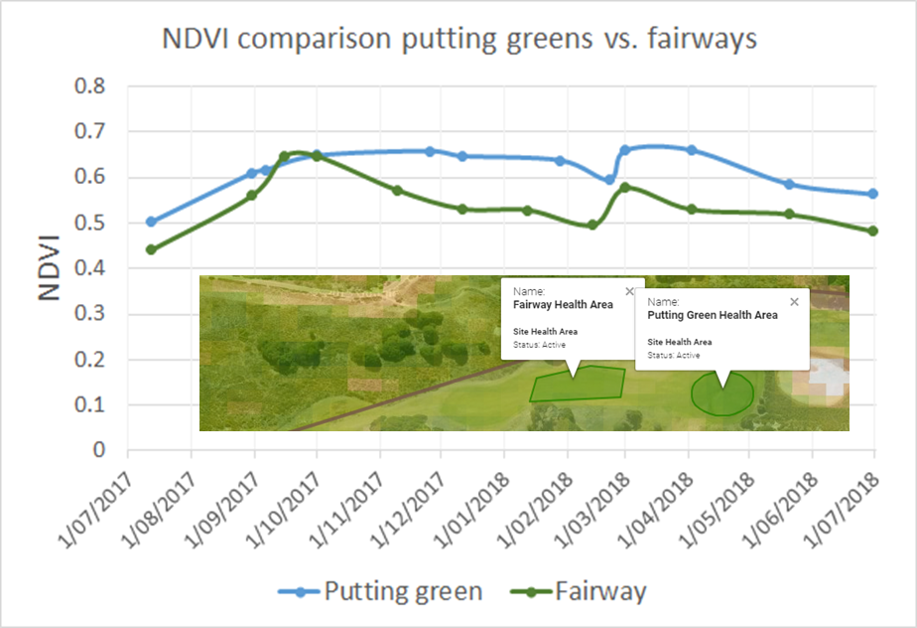 Most of the time with dry soil occurred during the dry autumn. Importantly though, there was almost no drainage during the season, and what little occurred was due to an extremely atypical 142 mm January rainfall event.

Nutrient additions to the golf course during Q1 and Q2 2018 are depicted in Figure 3. A report of total application by element is presented (Figure 3a), along with examples of reports showing weekly and cumulative applications via recycled water and granular fertiliser (Figure 3b and 3c, showing total N and manganese). These data indicate that nutrient applications to the turf should all be mopped up by growth and, given there were no drainage events due to irrigation, there should be very limited environmental discharge of N or P.

(Above) Figure 3: Seasonal and cumulative nutrient applications. (a) Totals for elements. (b) Cumulative total Nitrogen, applied irrigation water and one-off granular application. (c) Cumulative Manganese, applied once as a component of a granular fertiliser. All applications are in kg/ha.