An excerpt from SA Water’s recent paper detailing some of their investigative projects, which aimed to gain local evidence from around Adelaide and some regional centres in South Australia to use as a basis for improving the liveability of Australian cities and towns.

Our software partners, SWAN Systems, have stated that water savings of more than 20 per cent have been achieved in agricultural deployments. The longest user of this software for our project is Adelaide High School. They have quoted water savings of over 15 per cent for an urban oval. They have also stated that the software outputs, including the data from the soil moisture probe, have provided significant comfort to their grounds staff during hot weather as they have confidence in the outputs.

From the 25 sites monitored during the 2019/20 irrigation season, a wealth of data was collected to show the benefits of using this approach to manage irrigation for large open space. Whilst there were some issues related to communication problems because of the location of some soil moisture probes and smart meters, there was suitable and consistent data obtain from 14 parks, which is discussed below. 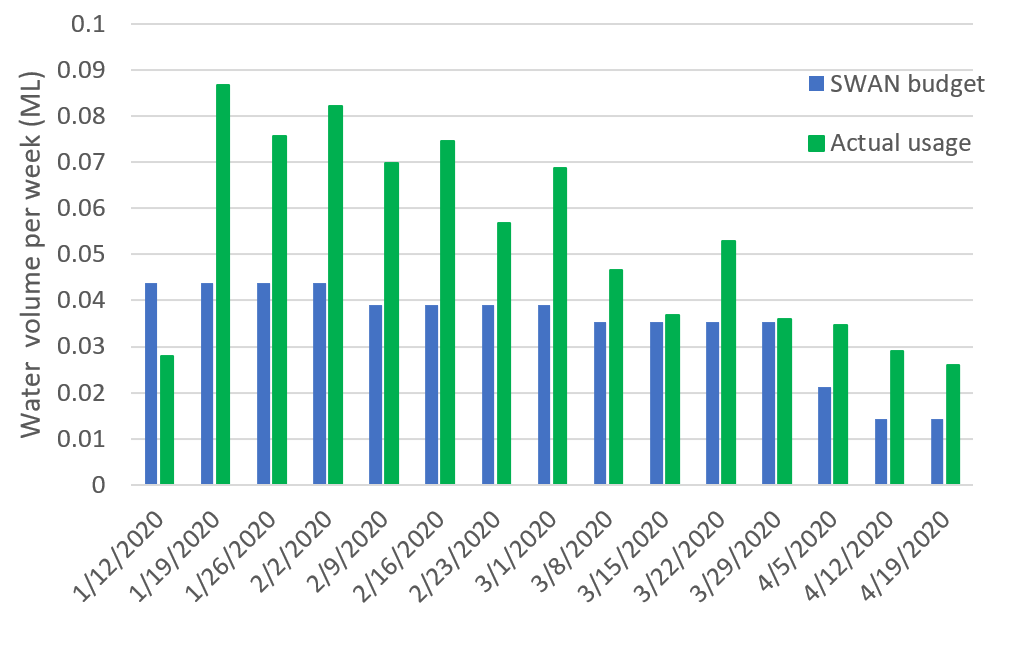 During the first month, a total of $1500 worth of water was applied to this relatively small park. During the second and third month, through the SWAN outputs informing the irrigation schedule, water use was reduced to $500 worth of water applied each month. The average maximum temperature was within 1 degree between the first and second month, demonstrating this was not as a result of the weather cooling. Based on the trajectory of the first month of water use, the council saved an estimated $1400 of water for this park over the irrigation season.

The collated data from all the monitored parks across all participating councils showed that the average additional water use was just over 30% for the 2019/20 irrigation season. Extrapolated out across the entire Adelaide metropolitan area, this would equate to an optimisation opportunity that could provide an additional 1.7GL of water (1.7 Billion Litres!) for other currently-unirrigated open spaces, and the subsequent benefit for the community through more green open space for recreation. This is now the focus for the next stage of the smart irrigation program, which involves the roll out of the commercial version of smart irrigation for councils, schools and other open space managers.

Want to learn more about how data can be used to save water and make better irrigation decisions? Check out our case study on a sporting complex within the City of Armadale.